Ten Titans teams will be participating in the playoffs in their respective leagues this weekend starting tomorrow and concluding on Monday, February 28.

The teams that will be participating are:
Boys (Atlantic Youth Hockey League - AYHL)
1. Pee Wee Major
2. 16U Midget American
3. 18U Midget Premier

The 16U American team is the fourth seed, and they will be playing the top seed North Jersey Avalanche on Saturday at 12:15PM at Oaks. They then will play the Long Island Royals later that day at Ice Line at 7:30PM. Their third game will be held on Sunday (Ice Line) at 1:45PM against the New York Saints. The two top teams will be in the finals on Monday at 1:00 PM (Ice Line).

The 18U Midget Premier team is the fourth seed and will play against the top seed Philadelphia Little Flyers at 7:15PM at Ice Line. It is single elimination with the championship game held on Monday at 4:45PM at Ice Line.

The Bantam AA team is the fourth seed in the south and will play the first seed of the north which is the North Jersey Kings at 7:15PM on Friday at Hollydell. It is double elimination. The championship game is on Sunday at 10:15AM.

The MAWHA playoffs will be held at Hatfield Ice Area in Colmar, PA.

The 14AAA team is the third seed and they will play the number two seed New Jersey Colonials on Saturday at 5:30PM. The winner will play the top seed Jr. Flyers on Sunday at 12:00PM.

The second seed 16AAA Titans will play the third seed New Jersey Colonials at 8:50PM. The winner will play the top seed Jr. Flyers on Sunday at 1:20PM.

The eleventh seed 19AA Titans will play the sixth seed Ramapo Saints on Friday at 9:05PM. The championship game will be held on Sunday at 3:00PM.

The second seed 19AAA team will play the third seed New Jersey Colonial for three games. The first game will be on Saturday at 2:25PM and then later that day 7:10PM. The final game will be played on Sunday at 4:40PM.

Updates will be posted on the Titans social media channels. 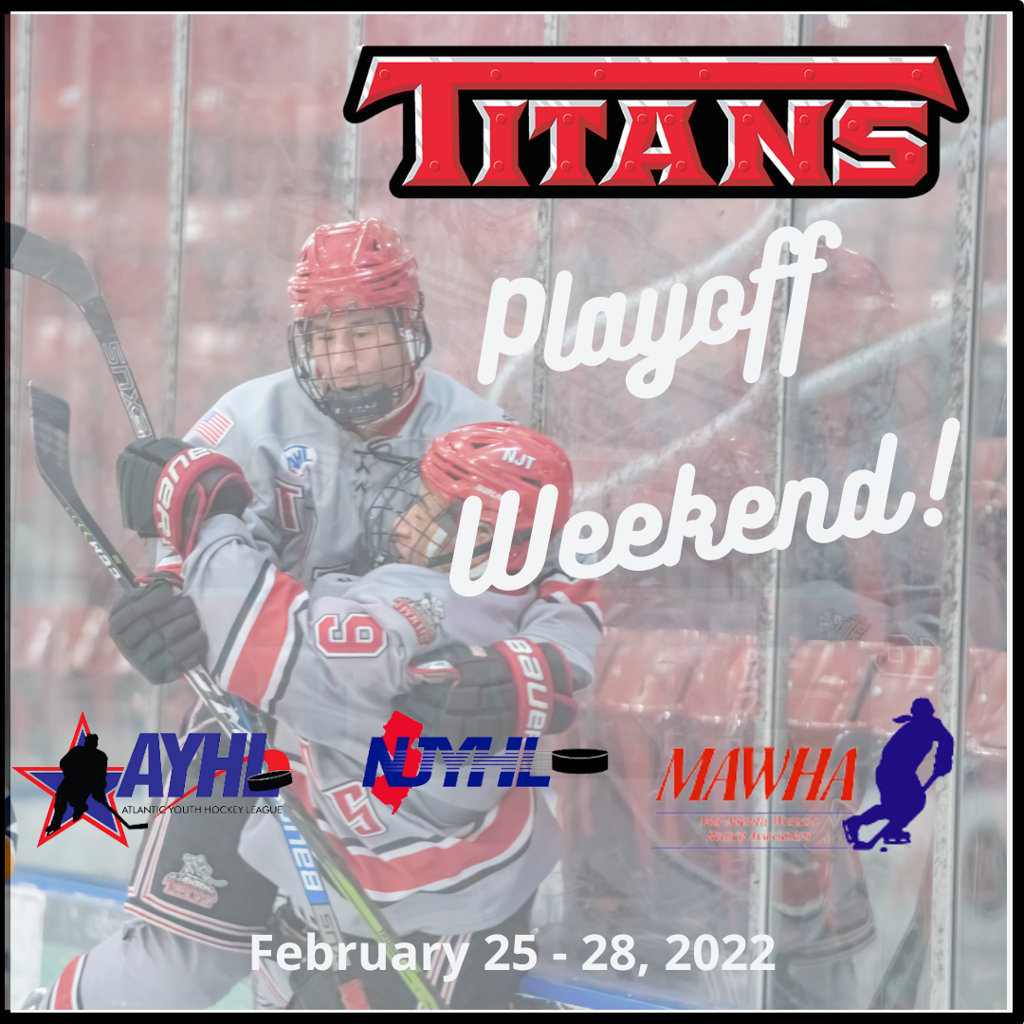