Tier 2 19U - Peyton Liebross – First Star
Forward, Peyton Liebross #25, put points on the board in both games for the 19U Tier 2 team this weekend.  Her goal in Saturday’s game came after she maneuvered thru traffic to get past the defenders driving to the net and placing a quick wrist shot past the goalie.  In Sunday’s game, Peyton picked up the puck in he defensive zone, out skated both defensemen, and drove to the net.  She was feeling pressure from behind but remained patient and made a well placed shot on net past the goal tender. Peyton’s speed and agility on the ice aids in her ability to skate with the puck make her a continued threat on the ice. She brings a lot of energy to the team and is a positive influence on the bench and on the ice to her teammates.

Tier 2 19U – Natalia Mancuso – Second Star
Forward, Natalia Mancuso #28, put the first points on the board for the Titans 19U Tier 2 in Sunday’s game. She used her speed to drive to the front of the net where she received a pass from her teammate and lifted it with a wrist shot past the goalie.  Natalia hustles on the ice to create turn overs in the neutral zone.  Her Hockey IQ helps her make quick smart plays that result in scoring opportunities for our team.   Her humor, positive attitude, and work ethic both on and off the ice makes her an asset to this team.

Tier 1 14U - Ava Pirrello – First Star
Forward, Ava Pirrello #82, is a hard-working teammate who stepped in to play with our Titans 16U AA team this weekend.  She scored a goal in the second period of the game vs Ramapo Saints 16U AA.  She skated the puck up the ice and past the defender to take a quick wrist shot from the top of the circle and putting it past the goalie bringing the game to a 1-1 tie.  Ava’s quickness and strong hockey IQ makes her a constant threat She has the ability not only to skate the puck up and shoot on net but also making fast decisions to create scoring opportunities for the team.

Tier 1 14U - Jess Smart – Second Star
Defense, Jess Smart, #26 is a team player in the Titans organization stepping in this weekend and playing with the Titans 16U AA team.  Jess came away with goal this Sunday in the game against the NJ Rockets 16U AA.  She received the puck from the face off and placed a hard fast slap shot from between the points into the top right corner putting points of the board for the Titans.  Jess agility and quickness allow her to make keep plays in the game.  She has been an asset this season stepping in to play forward and defense. No matter the position she is playing, she is always making solid plays. 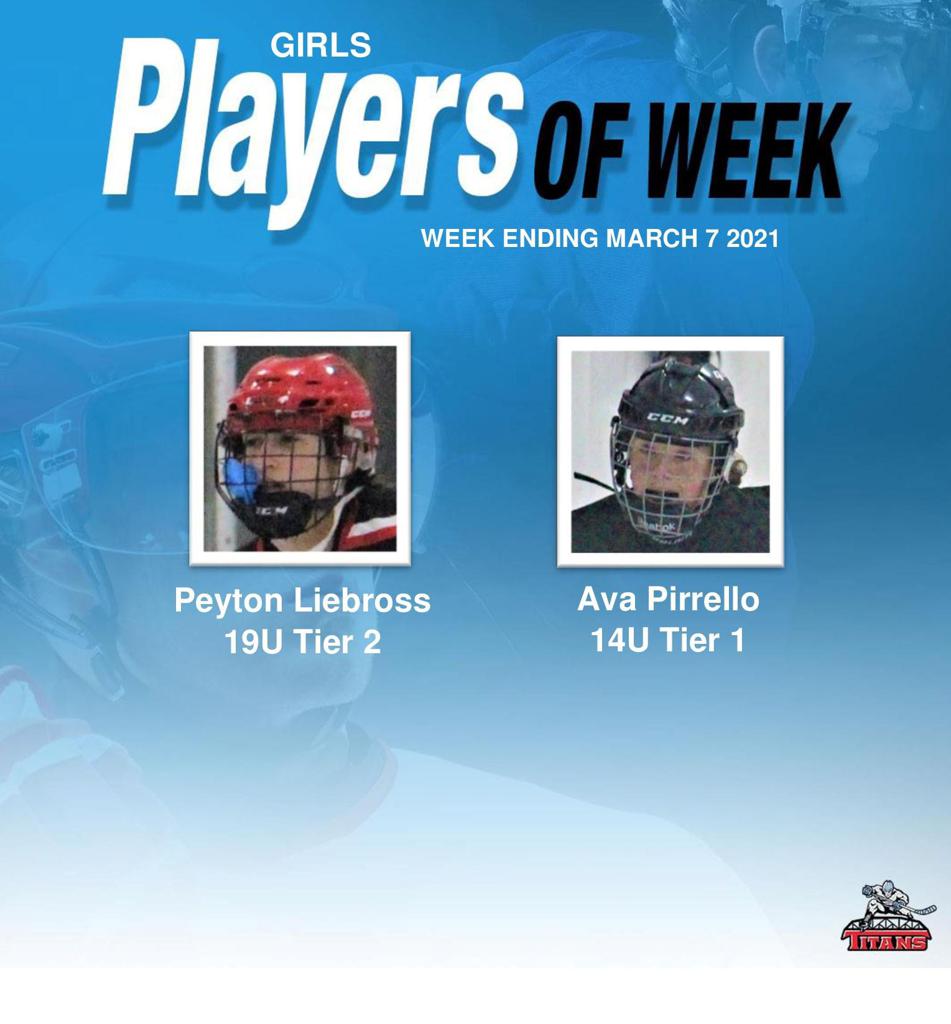