Tier 2 19U - Michelle McCabe – First Star
Michelle McCabe had six points this past weekend in two games. She had a hat trick in the game Saturday against Ironbound 17U Elite.  She scored two goals and assisted her teammate Josie DiFeo on a goal in the game on Sunday against Montclair Blues.  The Titans outscored the Montclair team 4-2 to give them their second win over Montclair in MAWHA.

Tier 2 19U – Josie DiFeo – Second Star
Forward Josie DiFeo scored the game winning goal against the Montclair Blues on Sunday.  She hustled past her opponents to give herself a breakaway and finished it off with a bardown snipe to put the Titans up 3-2.  The Titans went on to score one more goal ending the game with a 4-2 win over the Blues.

Tier 2 16U - Mackenzie Ketchow – First Star
Mackenzie has shown great improvement since the beginning of the season and had her first multi-point game this weekend. She recorded four points (2 goals and 2 assist) in the game on Saturday vs Union Thunder.

Tier 2 16U - Maddie Reynolds – Second Star
Maddie had her second shutout of the season vs Union Thunder; her first shutout was also against the Thunder back in November. She saw 60+ shots total this weekend and has been an asset to this team as the only goalie.

Tier 1 14U - Linhsey Covert – First Star
Forward, Linhsey Covert has continued to improve as a player in all aspects of her game.  As a Center, she is aggressive on the faceoff winning battles and getting the puck out to key players.  Linhsey scored a goal this Sunday in the game against the Ironbound 06 Elite team putting points on the board for her Titans team.

Tier 1 14U - Natalie Clark – Second Star
Natalie Clark earned a point this weekend with an assist to her teammate in the game against Ironbound 06 Elite on Sunday.  Natalie loves the game of hockey splitting her time between both the 14U T1 and the 16U T2 team.  She continues to improve as a player and has been asset to both teams.

Tier 1 12U – 12U Team – First Star
The Titans U12 Tier 1 girls team defeated the Princeton Tigers 4 – 2 to win the Pee Wee B Winter Whiteout Tournament held at the Jersey Shore Arena this past weekend. It was an all-boy teams except for the Titans. The girls played excellent. They passed the puck extremely well and played as a team. 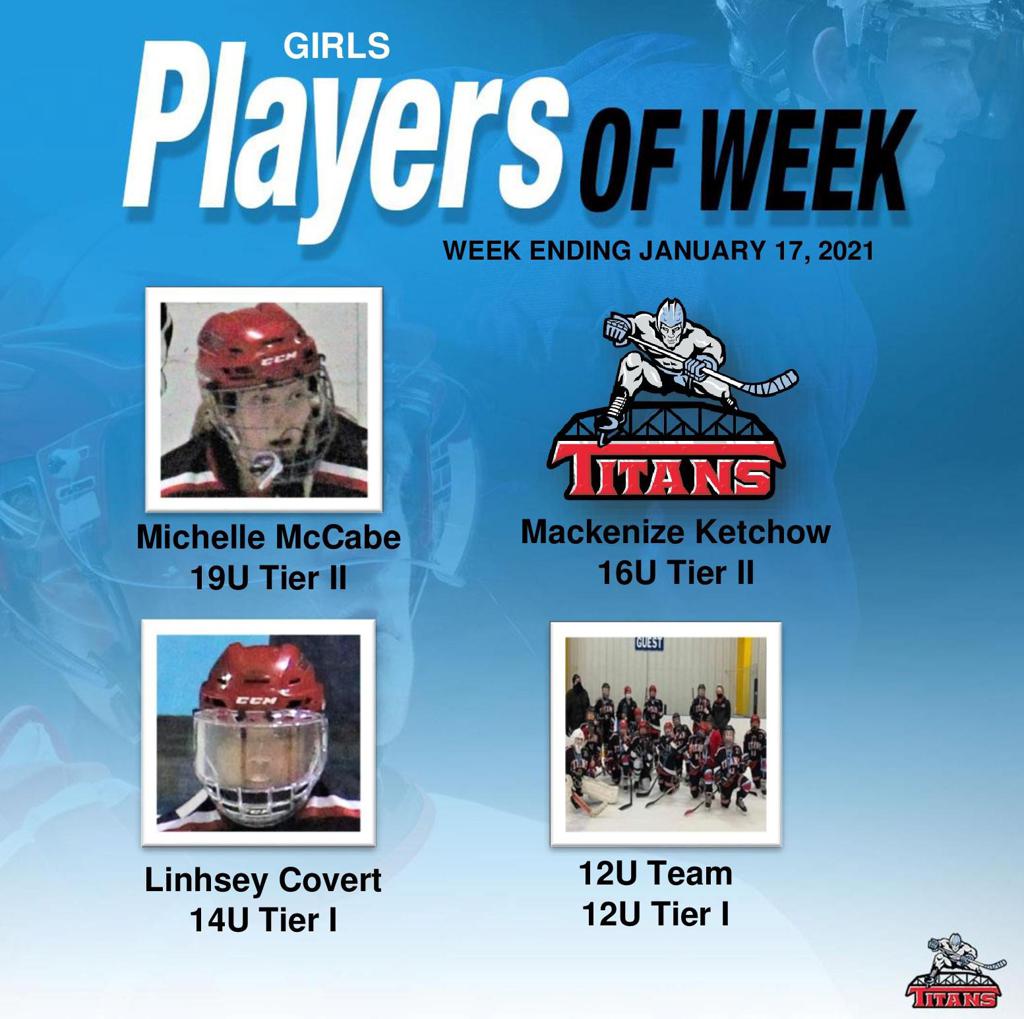